Beulah has secured another award win with the Beulah Pavilion taking out the people’s choice award. 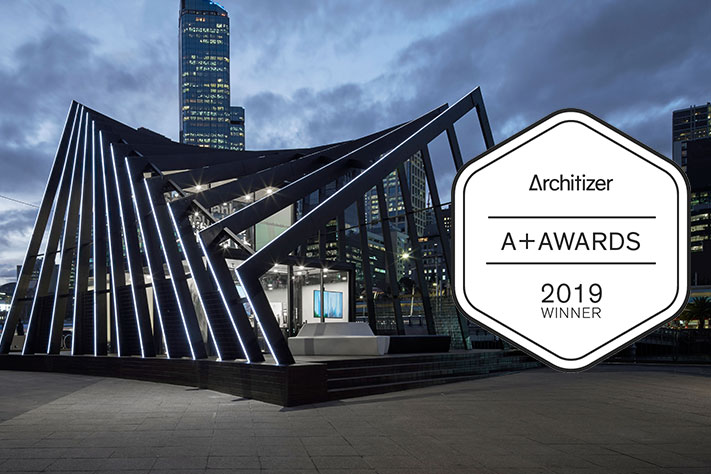 Beulah has secured another award win with the Beulah Pavilion taking out the people’s choice award in the internationally recognised Architizer A+Awards.

Brought to life by ODO, the pavilion was designed to be an ephemeral structure for jury presentations during the Southbank by Beulah architectural competition.

Shortlisted from hundreds of entries in the Pop-Ups and Temporary category, it was designed and constructed in a rapid 48 hours as a public art installation along the banks of Melbourne’s Yarra River.

Conceptualised to represent the city being in a state of constant motion and change, the pavilion whirled around a common axis with its frames lit by programmed lights to further emphasise movement.

The Architizer A+Awards is the largest awards program focused on promoting and celebrating the year’s best architecture and products. Its mission is to nurture the appreciation of meaningful architecture in the world and champion those products that are integral to bringing great buildings to life.

for STH BNK By Beulah and BETA By STH BNK

Meet the Architect Mastermind behind
STH BNK By Beulah

Read More
Fill in your information below

STH BNK by Beulah is set to be Melbourne’s most expressive global address. Be the first to explore every possibility.

Dynamic, immersive, and multi-sensory, BETA is an event series reimagining retail as we currently know it by creating boundary-pushing blueprints for dining, fashion and wellness.